In this lab, you will insert static images (also referred to as graphic or video overlay) over a video stream, create multiple inputs and attach those inputs to a MediaLive channel, and switch between multiple inputs.

When streaming live video events, it is common to switch between different inputs. For example:

It may also be useful (or required) to overlay an image or text over the live stream to:

In this lab, you will:

During the lab setup, an AWS CloudFormation template will create a live streaming workflow.

InDesign - How To Place & Format Images - from 51sec.org

2 and compresses that it into multiple lower-resolution versions that are suitable for streaming over the internet.

4 which will temporarily cache the video and then package it and serve it up to viewers upon request.

In actual practice, to serve hundreds, thousands, or millions of simultaneous viewers, the packaged video streams need to be fanned out through large distribution networks. This is called a content delivery network (CDN). Amazon CloudFront is a CDN. To save time in this lab you will not create a CloudFront distribution. Instead you will play the video directly from MediaPackage.

5 In this lab, the sources will be files in an Amazon S3 bucket, playing in a loop to simulate a live feed. You will use the Schedule function in MediaLive to insert static images over the video (also called video overlay), and to switch between multiple inputs. 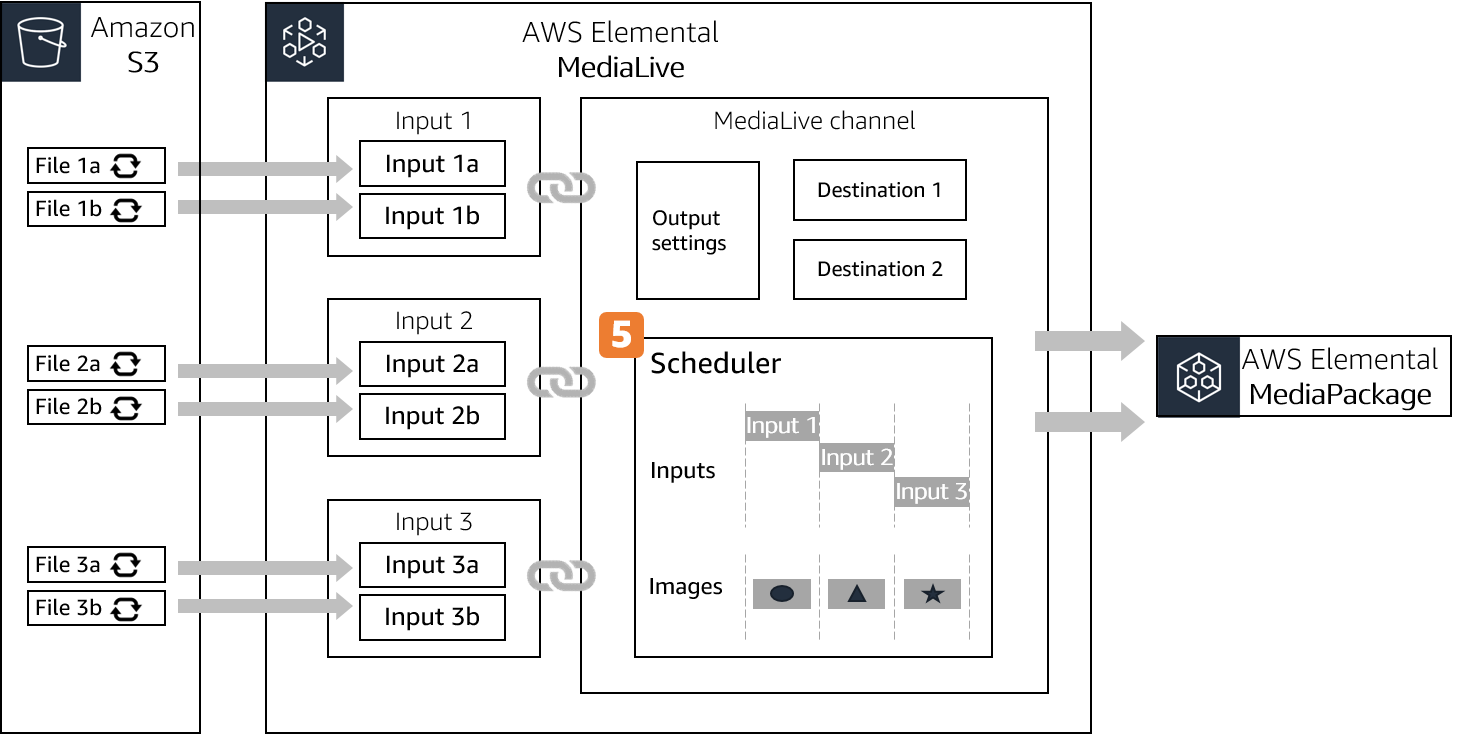 By the end of this lab, you will be able to:

This lab is built upon a live streaming workflow that was created in the Building a Live Video Channel with MediaLive, MediaPackage and Amazon CloudFront self-paced lab (SPL-207).

To successfully complete this lab, you should be familiar with the basic procedures of building a live streaming workflow using AWS Elemental Media Services, including:

You should also be familiar with the basic navigation of the AWS Management Console.

In this task you will start the MediaLive channel that was automatically created by the CloudFormation template, and validate playout from MediaPackage.

This will take you to the MediaLive page.

A new tab will appear for MediaPackage, but you will still be in the Services dropdown.

Note that the State of the input is  Attached. This means that the input is feeding into the MediaLive channel, where it will be transcoded according to the instructions in the channel.

There are two ways to check playback of the stream from MediaPackage:

You have now validated that the live streaming workflow is running. In the following tasks, you will configure MediaLive to insert static video overlays and switch between multiple inputs. 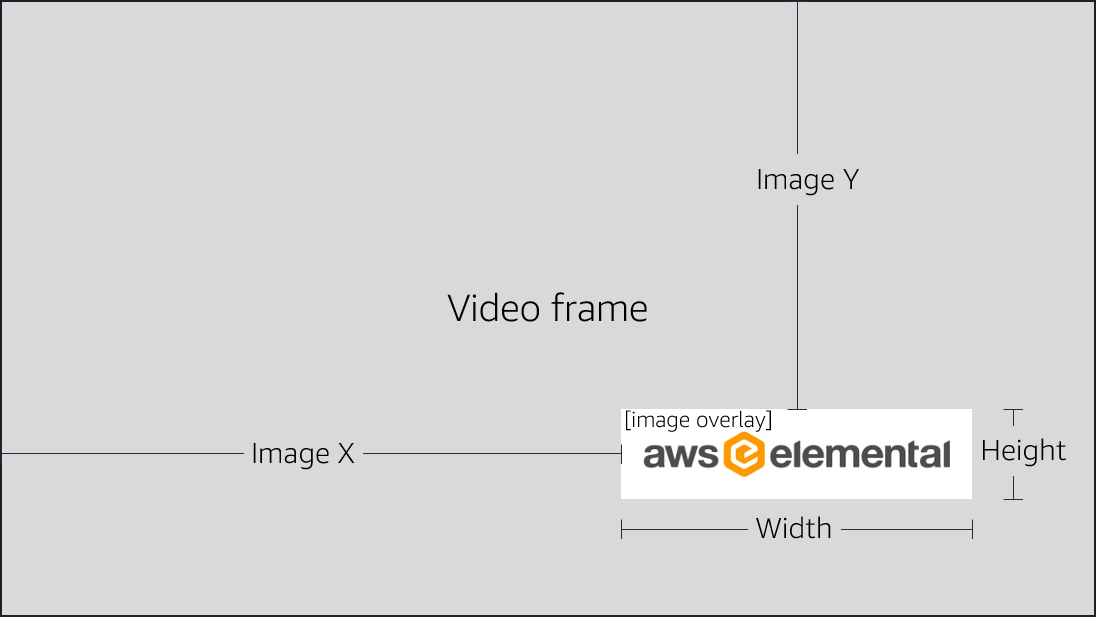 The terms static image and graphic are sometimes used interchangeably in the context of image insertion. In this lab we will use the term static image.

Static images are overlaid on the video stream using the Schedule function in MediaLive.

If created while the channel is running, the start times have to be at least 15 seconds in the future.

In this task you will create image insertion actions while the channel is playing.
Several attributes can be specified:

You can resize the static image and to set its position relative to the video frame by entering values in the appropriate fields in the console.

However, the best practice is to use a graphics editing application to build the static image the full size of the video frame, placing the static image to be superimposed in the correct position relative to the frame, and making background transparent. In this case, the image does not need to be resized and can be overlaid directly on the video frame, with no X-Y offset.

The image files provided for this lab have been built this way.

To see an example of a static image built into the lower right corner of a 1280x720 frame, click here:

This static image is in the correct aspect ratio (16:9) but it still might need to be resized to match the size of the input.

In this task, the resolution of your input is . You will need this information later.

The static images provided in this lab are built to a frame size of 1280x720.

The static image will be inserted at a UTC time that you specify.

Resize the window so that you can read the time and still see the MediaLive console.

You are creating this scheduled event while the channel is running. Therefore, the time for image insertion has to be at least 15 seconds ahead of the current UTC time. 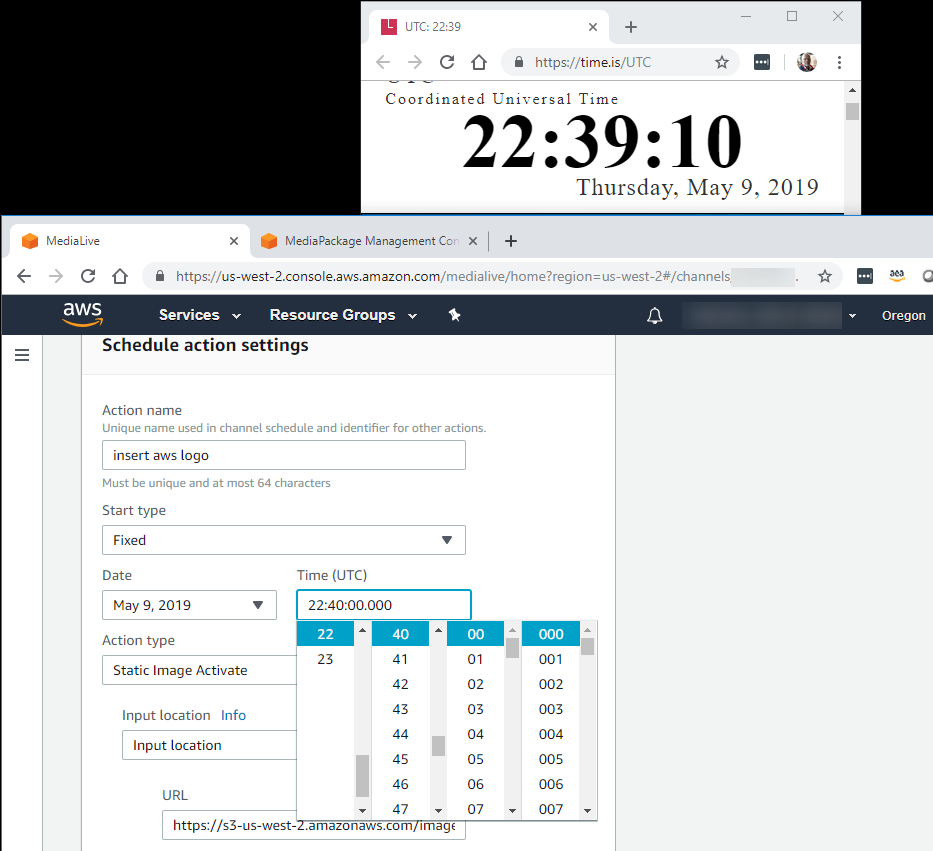 MediaLive will insert the static image at the specified UTC time. You will see the result in the playback window 45-120 seconds later. This is the standard latency inherent in live streams due to factors such as encoding settings, output type and network speeds.

Next you will make the static image fade out.

MediaLive will fade out the static image at the specified UTC time. You will see the result in the playback window 45-120 seconds later.

Scheduled actions cannot be edited or modified after you create them. If you need to change something in the settings, for example the start time, delete the action and re-create it.

Another way to view the list of scheduled actions is the Timeline view.

Typical use cases for input switching are:

There are three steps for input switching in MediaLive:

Input switching actions can be scheduled before the channel has started, or during the stream.

The start time for actions scheduled while the channel is running have to be at least 15 seconds in the future.

In this task you will initiate switches while the channel is running.

You will create three additional inputs using short (1 minute duration) MP4 files that will be played in a loop, to simulate live feeds.

It is a good practice to put the resolution (Width x Height in pixels) of the input into the Input name so that if a static image is going to be overlaid you know what size it needs to be scaled to.

For the purposes of this lab you are using same source for both of the redundant inputs. In actual practice you would use two identical, but distinct sources.

Attach multiple inputs to the channel

Wait for the channel to go to the Idle state (approximately 60 seconds).

The inputs for this lab are short MP4 files (~1 minute duration). In order to simulate a continuous input, the files will now play in a loop.

Wait for the channel state to show  Running

MediaLive will switch to the new input at the specified UTC time. You will see the result in the playback window 45-120 seconds later.

It isn't necessary to create switch actions for all the inputs. If you feel you understand the concept and procedure after doing a couple of switches, you can move on to the next task.

In this use case, a series of input files are going to be played back-to-back with no gap between and without requiring manual switching. This is sometimes called running a playlist. The schedule will be created while the channel is idle, then the channel will be started and the files will play in sequence.

For this lab, the input files are short (1 minute duration) so that the switching is more timely.

Modify the end behavior of the inputs

In the previous task, you set the Source end behavior to Loop. This was done to simulate a continuous input. However, in this task the behavior will be changed so that when the file is finished, it will not go back to the beginning.

Wait for the Channel state to show Idle.

Under the CONTINUE setting, the file will stop playing when the end is reached. This is necessary for the Follow function in the schedule, which you will create in this task.

Do this for each input.

This is to give you lead time to configure the rest of switches and to allow for the channel startup, which can take up to 4 minutes.

Approximately 45-120 seconds after the first UTC switch time that you specified, you will clean switches from one input to the next in your playlist. These are the Follow type switches being executed.

Refer to the online documentation for AWS MediaLive for further details.

Congratulations! You now have successfully:

Follow these steps to close the console, end your lab, and evaluate the experience.

You may close the dialog if you don't want to provide feedback.

For feedback, suggestions, or corrections, please email us at [email protected].