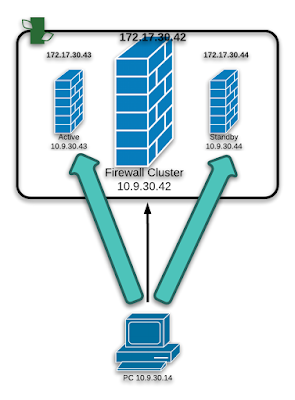 I did my search and found from Checkpoint Support Site, Checkpoint’s explanation is “this is expected behavior. Connections to the Standby cluster members are not supported in HA clusters, by default.”

To find out more details about this firewall behavior, I did some basic troubleshooting to see packets flow.

2. Check the drop packets from Active member 172.17.30.43, it seems the packets dropped by active firewall.It did not pass the traffic to standby member.

Note: during the research, also SK97587 mentioned “in some cases when the traffic originates from the standby member, return traffic is forwarded from the VIP to the active member, which drops that traffic.“

My old post “Check Point Cluster Member Gateway Drops Ping Packets Without Log in Smartview Tracker” has a similar symptoms as this case, but cause is different. The solution is enable simultaneous ping parameter in the kernel by this command:  fw ctl set int fw_allow_simultaneous_ping

The solution is pretty simple, there is a magic parameter in firewall kernel for this kind of situation:

Basically, when this parameter is set to “0”, packet forwarding will NOT be done to a non-active member. Instead, a reset packet will be sent to the client.

With following command you can verify the setting:
# fw ctl get int fwha_forw_packet_to_not_active

To set it permanently to survive reboot, add this line to the file $FWDIR/boot/modules/fwkern.conf :
fwha_forw_packet_to_not_active=1

Then reboot. Perform this on both cluster members.

a. Troubleshooting “Clear text packet should be encrypted” error in ClusterXL